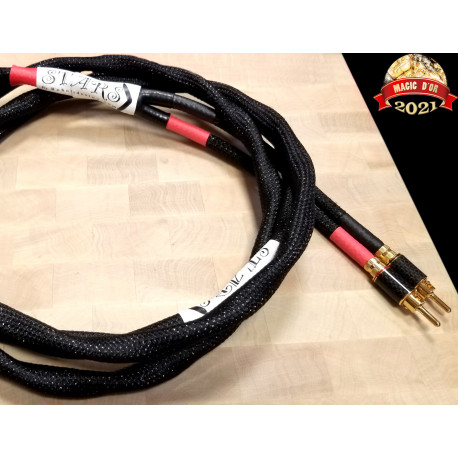 We are seized by the impression of an infinite bandwidth which brings this singular ease. This benefits the instrumental readability but also the dynamics, really without compression.

High Fidelity analog cables are too often manufactured with a conductive alloy of low resistivity (R) to avoid the skin effect and an impedance (Z) imposed in order to be optimal. The behavior of the cable varies depending on the low and high frequencies. Until now these simple physical phenomena were ignored because they could not be remedied.

The STARS cable is made of a telluric copper alloy whose conductor has more free electrons per unit volume than other materials. The higher the number, the better the driver. It therefore offers less resistance to the passage of the modulation current. Furthermore, this quantity of energy transformed into heat considerably reduces the collision with metallic atoms, hence its very low resistivity. Who says low resistivity says suppression of the magnetic field of induction. Who says impedance control says adapted frequency response.

3 other products in the same category: